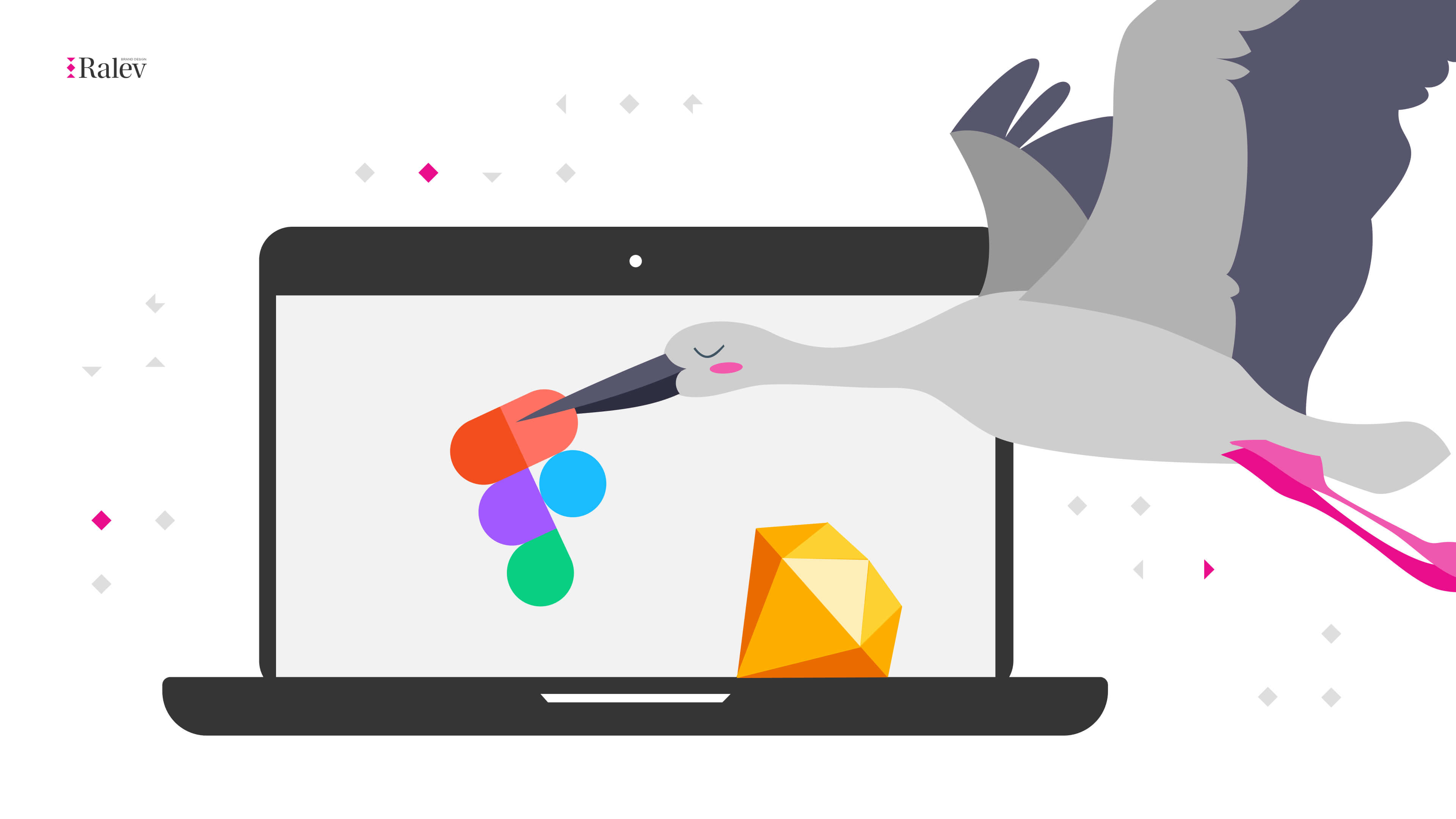 If one thing is 100% valid about all designers, it’s that each and every one of us has our own proper, “sacred” set of tools and UI software that guide us on every project. Some of us alter dozens of subscriptions to finish a project. Others aim for a more minimalistic approach and try to accomplish most of the work using only one software and tons of plugins. Luckily, today there are tons of UI design tools available, which wasn’t the case 15 years ago.

We used to all have our separate design workflows, but then Figma came around and united us for the better. Why – because it was the tool that finally allowed us to skip Dropbox, iCloud and collaborate in real-time. Ok, we’ve dropped the bomb too early, but there is more to learn, so keep reading.

In this post, we share our views and professional experience using different software and why we’ve chosen to migrate to Figma permanently.

Adobe fireworks was once the preferred software to create user interface design. As flexible and easy to use as it was, allowing a wide variety of extensions, back in 2013, Adobe abandoned Fireworks without offering a replacement tool. That’s how we switched to Sketch like many other designers, making it the preferred program.

Framer X has been the topic of discussion a lot recently, with many users describing it as excellent UI software. This is because Framer allows you to use functional components when designing something. The app’s also has a sort of a “Store”, which offers different components that help you finish up your project and speed up your work, and they can range from simple icons to buttons to ready-made transitions. It is also another collaborative UI, so your whole team can join in and work or review the process simultaneously.

All in all, we gave Framer X a fair shot – it’s actually a great prototyping tool. Animating between screens, animating components and buttons is really easy and the results look completely like a finished product. Layer management is semi-automatic and it really saves a lot of hassle. However, Framer is simply made for mobile interface design, to a lesser degree desktop app interface design, and it really shines in that department. We tried to use to design a couple of web pages and felt it was a bit ill-suited for that as it is today. However, we are keeping our eyes peeled for what Framer X can offer in the future!

Sketch is the traditional UI software choice and one that, for a while, was the undisputed best application for interface designers. Two years after its initial release, in 2012, Apple attributed an award to Sketch and put it among the best creation apps. We should bear in mind that until 2015, Sketch was available for purchase only from the App Store. But due to Apple‘s strict technical guidelines and pricing politics, they pulled it off and started selling through their own platform. This may look risky, but they were already the most popular choice among designers, so it was also the logical decision. However, staying for so long with Apple might be one reason why over time they lost the leading position.

The pros and cons

One of the major drawbacks of Sketch is that it has always been available only for Apple computers. The software was never adapted to Windows or Linux. A large part of the design community does indeed work on Macs, but neglecting the rest limits users’ potential market.

Another issue we personally had was the lack of many features that instead we had to acquire through different plugins and third-party apps to fill in the gaps. And while some plugins are free, others are quite expensive. Just a brief example we are all familiar with. Plant is used to sync versions between designs, and it comes at 144$ per contributor annually. Additional Sympli charges 270$ yearly to add developer to the project, and let’s not forget Invision used to share it with clients that are about $120 per year with Invision. So we can say that in specific terms, the developers neglected the cost factor.

Excluding the pricing of almost essential plugins and the limited compatibility across different operating systems, Sketch has actually done a lot to catch up with its competitors. In a year, the company has introduced a lot of noteworthy updates. One of the major ones is that Sketch now offers a possibility for teams collaboration. This helps to sync the work, but to be honest, this took too long to implement, considering the feature is one that lot of people have been suggesting in forums since Sketch 2.0.

And while today’s designers can export an entire design with a fully functional spec for developers, Sketch still hasn’t made it to that point. But an excellent example of this is Framer X that has taken design and prototyping to the next level.

Adobe makes a comeback with Adobe XD which has been rapidly rising in popularity in recent years, with the two main factors contributing to that being 1. It comes with the Adobe monthly subscription, and 2. It’s available for both macOS and Windows. We used XD for a while when we were looking for a Sketch replacement. Back then, it had a lot of room for improvement.

XD shines in the prototype department, as it’s able to produce hi-fi UI prototypes with smooth, smart animations. It has had an extensive plugin library for years and has recently implemented shared workspaces via the cloud. This allows multiple users to work on the same file together – a feature that was initially available only on Figma. You can either work simultaneously with a coworker on a cloud or upload and share your computer file.

Nowadays XD also allows developers to view the design and take code snippets directly from it. This, alongside the collaboration feature, has become a staple of good UI software. However, XD was simply too slow to implement it. We needed something more flexible, and XD seemed to be stagnating. In terms of updating and staying on top of the innovation wave, XD seems to just be one step behind, and we as a studio aim to always ride the innovation wave.

Fast-forward to today, we have Figma – this is our sworn tool of choice and the one we believe may have revolutionised UI design. Figma was first introduced in 2015 with initial funding of $14 million to fight Adobe XD. Safe to say they reached their goal, and we find it kinda funny that we started loving Figma exactly because we felt XD was too limiting.

There is a lot we can say about Figma. It’s basically the Swiss Army knife of UI software – extremely versatile, with
cross-compatibility across macOS, Windows, Linux, and any operating system, really. The software is browser-based by DNA, just like Google Docs, which was the initial inspiration for Dylan Field. He aimed to create a collaborative tool for interface design to level up the productivity of the teams.

The pros and cons

Figma is web-driven, and it was the first-ever UI software to offer real-time collaboration. This was a complete game-changer for most teams. With multiple people having access to the same file, everyone must always be looking at the latest version. Figma makes sure of that, as every single change is auto-saved to the cloud. You don’t need to clog your hard-drive or constantly worry about losing your work due to power outages, freak accidents, and failed data recovery. That’s great, isn’t it?

Another fantastic feature is that there is version control to rewind a project to previous states. We all know how precious this is especially when you work with others and need to get on track fast. The commenting feature and seeing all coworkers’ names help you see what they are working on in real-time. Even the communication flow is effortless, no need to shout to the other end of the room to check on Sally anymore. Hip-Hip-Hooray!

We make a lot of wireframes and a lot of web concepts. Figma is our absolute favorite tool for that, no competition about it. Designing each element is extremely simple. The controls and interface are sleek and easy to understand, and new innovative features are constantly added to the app. The only thing that was missing from Figma for a while was plugin support, but that was officially added to the software in mid-2019. Now we really have nothing to complain about! And just to sprinkle all this a bit more, Figma offers webinars and has an extremely active and devoted community.

Well, there you have it. We go through a lot of tools in our experience, and Figma amazes us almost every day. However, that does not mean that any of the other UI software suggestions in this article are bad. It simply means that Figma is our soulmate, and it allows us to be our best productive selves.